Derek Swinnard was 45 years old when he as diagnosed with ALS in 1997. He is now in his 60’s, and still golfing. Below is Derek’s story.

Derek Swinnard was an athlete, basketball coach, school teacher, husband and father of 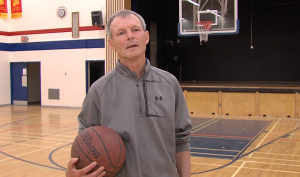 two daughters. In 1993 & 1994, when he was in his early 40’s, he noticed he was not running as well, and dropping balls so much so that he stopped playing with his local baseball team because he felt he was no longer contributing. He joined an “over 35” basketball team, yet his older teammates were outrunning him. He had difficulty shooting and he seemed to be falling a lot. He developed drop foot in his right leg, which the neurologist had told him was an “irreversible L4 problem”.

Derek tried acupuncture and also saw a chiropractor who specialized in sports injuries. They seemed to help somewhat yet over time his symptoms worsened. On his “old-timer” ice hockey team he started having trouble standing and fell often. In the classroom he was 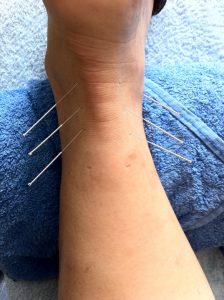 dropping chalk in class, and had trouble throwing and catching things. A physiotherapist noticed his right calf was visibly atrophying.

In June 1995, on a visit with friends, he tried special insoles and tried sleeping on a magnetic mattress pad, both of which he purchased and both helped, but overall, Derek’s symptoms continued to worsen. He was experiencing bad muscle cramps, severe muscle twitching, and began to have trouble stepping in and out of the bathtub.

When he went back to visit his friends in September, they literally put him in a car and took him to a local naturopath, who did live blood cell analysis, and showed him his blood versus healthy blood. His naturopath identified free radical damage, white blood cell problems, as well as yeast and fungal infections. He left the office with dietary instructions (including no fried foods, no red meat, no carbonated drinks), liver and kidney cleanse supplements, and a number of other supplements. Although Derek felt he might be getting scammed after the $400 bill, he trusted his friends’ judgment and decided to follow the naturopath’s instructions. After several months of strictly following the regimen, in November 1995, he returned for another live blood cell analysis and could see for himself the obvious improvement in his blood.

Also in November 1995, Derek began seeing a homeopath, an hour and a half’s drive 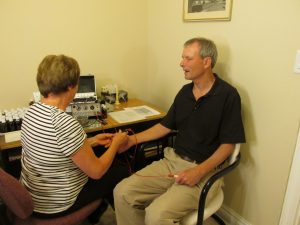 north, who found lead toxicity, and a number of other abnormalities.

Although he was feeling better with his holistic treatments, Derek knew there was something still wrong. He noticed during weight training his strength had diminished and that his left side was weaker than his right. He saw a doctor for blood work and his doctor noticed enough abnormalities to refer him to a neurologist. The neurologist ordered tests, including a nerve conduction test and muscle biopsy, which were inconclusive so Derek was finally referred to a neurologist in Toronto in June 1996, and continued visits about every six months. After the fourth visit, he was definitively diagnosed with ALS in December 1997.

During all of his visits with traditional doctors in the process of getting diagnosed, Derek’s doctors did not suggest any treatments, only more tests. So during the period from June 1995 until he was diagnosed in December 1997 Derek continued with various holistic 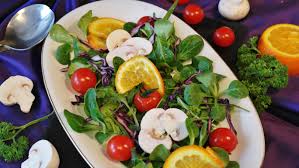 regimens. He continued the diet and supplements that the out-of-town naturopath recommended, then found a local naturopath to work with. He was also treated by a Chinese herbalist/acupuncturist, and continued with the chiropractor and the homeopath. He felt positive results from these treatments, their approaches made logical sense to him, and he was taking positive steps towards his health versus doing nothing while waiting for test results and more neurologist referrals.

As a result, after two and a half years of holistic treatments while getting diagnosed, by the time the final diagnosis came in December 1997, Derek’s symptoms were about 60 percent better than they were at his lowest point.

Still, when the diagnosis finally came, afterwards Derek was in a daze. He told his wife, 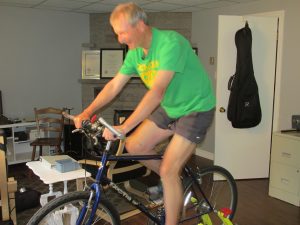 After his diagnosis, Derek stepped up his holistic therapies. He saw his homeopath regularly and continued with the naturopath, who started researching ALS and based her treatments on what she found. He was referred to a different chiropractor who found and cleared three blockages in his spine. His lower back felt better and he found out spinal blockages could also affect nerves going to internal organs and glands, like the adrenals. His Chinese herbalist/acupuncturist referred him to a well-regarded acupuncturist from China, whose treatments helped his spasticity and walking. He had some sessions with a cranial sacral therapist. Derek also researched on his own. He found 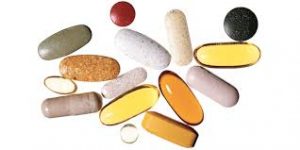 and tried a number of vitamins that might help. He had no adverse results from any supplements except for calcium-based supplements. He took grape seed extract almost from the beginning and still takes it today. Derek also found Steven Shackel’s website in 1998, now http://shackel.org, to be extremely valuable and some of the protocols on that site were helpful. After reading about liver function he added NAC, milk thistle and burdock root to his regimen and noticed the yellow tinge in his eyes disappeared. He shared with Steven via email his success and others wrote to Derek wanting to know more details. Just knowing there were others healing ALS holistically and trying to heal had a positive effect.

While working on his holistic treatments after his diagnosis, Derek continued to work as a school teacher. He thoroughly enjoyed his work and it helped him keep his mind off his disease. Still, the stress of “acting normal” while dealing with a terminal diagnosis, worried about falling, wondering each morning if he would be able to walk to the bathroom, Derek began to have mood swings and had a very short temper. Finally, during an outburst about eighteen months after diagnosis, his wife insisted he share what was happening with their daughters, and shortly after that they shared it with other close family members and friends.

Derek was raised United and his wife is a devout Catholic. His routing included saying the Lord’s prayer every night and thanking God for what he does have, rather than focusing on what he does not. Still, around the time he shared his diagnosis with his daughters, even though he was continuing to improve physically, Derek was frustrated with his slowness of his improvement. In late August 1999, Derek remembers going out onto his back deck, looking up and saying “God, could we make this better or just get it over with?” He said it not as an ultimatum, but rather a plea for help.

About two weeks later, Derek was coaching a basketball clinic and that night he had a dream. In that dream, a person he thought he recognized said “Hi Derek” and a peaceful 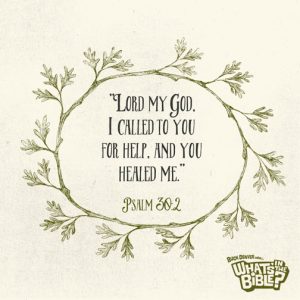 feeling came over him. Later in the dream the room was very crowded and Derek thought he might fall and he felt someone intentionally bump his back. He could not turn around but a hand appeared and showed him a note, and he felt that same peaceful feeling. On the note was written “Psalm 30” and then he woke up. When he looked up Psalm 30 it was “The Blessedness of the Answered Prayer”. He couldn’t believe what was written and when he showed his wife, she cried.

After the dream, things seemed to shift. Derek’s fear of death subsided considerably. The emotional roller coaster he had been experiencing during and since diagnosis calmed. When he felt down he knew that someone was watching over him. 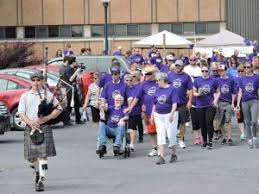 About three years after diagnosis, Derek finally shared his ALS diagnosis with his colleagues at work, and soon the school and community knew. They had been aware of the gait issues and likely thought it was MS or Parkinson’s. This led to Derek getting involved in the local ALS community. He participated in fundraisers, including annual ALS walks. He remains involved to this day and also participates in the national Canadian ALS Society as an ALS patient representative.

Over the years Derek has met and shared his story with many people diagnosed with ALS. Some are interested in what he has done, others are not. Some try some treatments and then seem to give up. Many have not had the level of success that he has and to them he would like to say, “Be patient, be persistent, keep trying things, keep researching, see holistic practitioners, stay positive, and don’t give up”.

Today Derek feels he is about 95 percent better. After over 20 years experience with ALS, 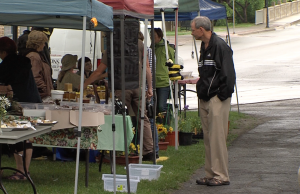 he knows that positive mental attitude is key to healing. Without being positive, without gratitude each day, without letting go of the negative things in life that happen almost daily and turning them to positives–all the physical therapies in the world will not be successful.

Someone once told Derek that healing is like peeling an onion. Until you get to each layer you don’t know what needs to be healed, and until you heal that layer, you won’t be able to see the next one. This is why the same treatment that did not work at an early stage of healing, might work at a later stage of healing. The onion example can be equally applied to physical and emotional healing.

Derek credits also his healing not only to his own positive attitude, research, and acting on that research, but also to the various medical professionals that helped him in his healing 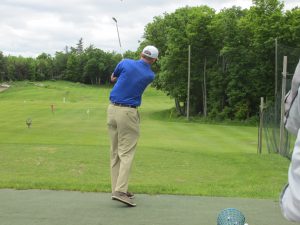 journey. They worked with him on nutrition, supplements, detoxification and applied their expertise to helping him heal. His homeopath and naturopath were especially key, but the chiropractors and acupuncturists were important as well. Even the magnets had a positive impact. Having the support of his wife, family and friends was also key. His friends dragged him to that first naturopath and set him on his healing journey. His wife supported him while he tried any and every treatment he could find. Steven Shackel provided him with information on his website. Each holistic professional and each chance article he read or encounter with a friend all contributed to his healing. 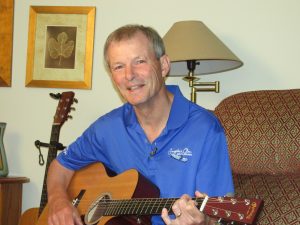 Derek suggests considering prayer and reading Psalm 30 for anyone diagnosed with ALS. He believes we will eventually go to a better place, but in the meantime don’t give up on getting better now and do everything in your power to heal.

You can reach Derek at swin@sympatico.ca